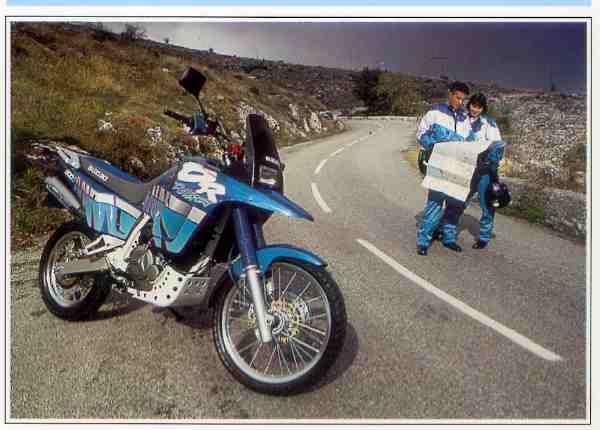 The biggest single on the market

With a bore and stroke of 105x90mm, the DR 800S actually displaces 773cc. It develops 54 hp at 6600 rpm allied to maximum torque output of 6.32 mkg at 5400 rpm. Nevertheless, this mammoth single proves to be quite docile to ride, with a nicely progressive power curve and lots of midrange urge for lively pickup. This excellent performance is underscored by vibrations which have somehow escaped the attentions of the double balance-shafts.

It's a tremendous achievement for the engineers of Suzuki who have also endowed this engine with combination oil/air cooling. The 1990 version of the DR 800 was known as "Desert Express" after the famed Zeta 820cc competition prototypes which challenged the twins in African rallies. They may have been high and heavy, but their heritage is one of which the DR 800 can be proud, while its handling is exceptionally clean and well-balanced. Well-suspended, comfortable, precise and safe, the DR also has unique aerodynamic styling, with its head fairing extended forward in a distinctive "duck's bill." This is decidedly an out-of-theordinary "bigger single."

The Suzuki DR 800 S is the biggest single-cylinder motorcycle on the market and surely a collectorÂ’s classic of the future.