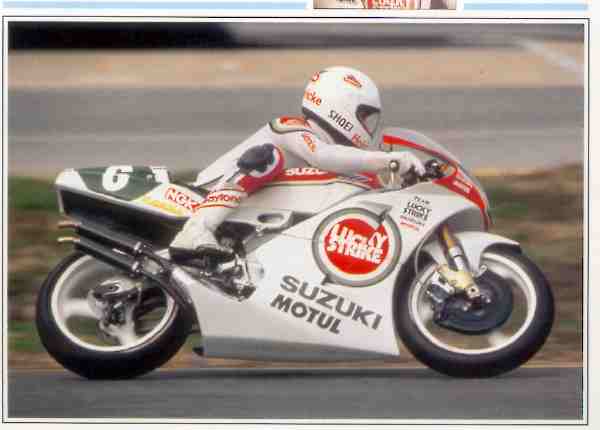 In 1991, after 25 years absence, Suzuki returned to the 250cc class - the only one in which it had never won a world title. Its rider was the young German, Martin Wimmer, who had just enjoyed two brilliant seasons in 250cc racing. Riding for Aprilia, he finished respectively tenth and sixth in the world rankings. Wimmer rode the new Suzuki through its first season in 1991, but could only manage ninth place in the championship behind Honda and Aprilia.

For 1992, Lucky Strike-Suzuki, newly based near the Castellet circuit in France, signed the Dutchman Wilco Zeelenberg and the Spaniard Herri Torrontegui. The four competing factories - Honda, Yamaha, Aprilia and Suzuki - all used very similar two-stroke V-rwins.

The Honda and Aprilia engine had equal bore and stroke measurements. While Yamaha and Suzuki opted for oversquare dimensions of 56x50.7mm. All four used automatic intake valves in the crankcase. Suzuki possessed six transfer ports and three exhaust ports-and all had electronic valves controlling the exhaust. Programmable electronic ignition and six speeds. Frame construction was similar too, with double aluminum backbones and upside-down front forks on all four marques. This similariry of basic design among rhe competing machines meant that success boiled down to individual rider skill, and this led to exciting racing.