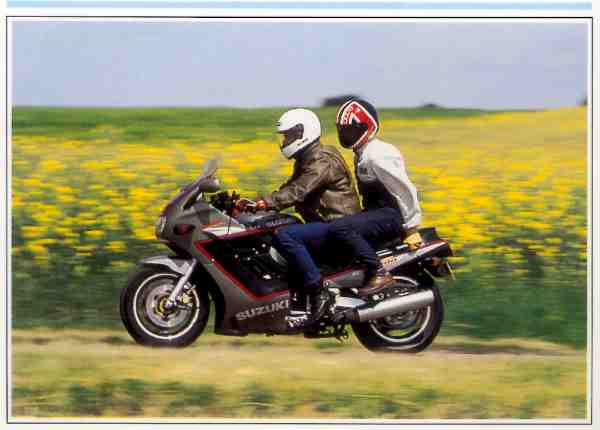 A Porsche on two wheels

Times are changing and motorcycles are in a ceaseless rush towards ultimate perfection, with bigger and bigger displacements and higher and higher perfom1ance. If today the top-of-the-range supersports bikes offered by Japan's Big Four are highly aggressive replicas of racing machines, then the large capacity machines that they market as tourers are genuine sports bikes in terms of both conception and performance.

The Suzuki is a little less agile than the supersports machines and better protected from the weather by a more comprehensive fairing. Heavier because of the larger dimensions and equipment intended for two up touring, these super highway bikes are the equivalent of a Porsche on two wheels. They combine exceptional performance with all the qualities of a genuine Grand Tourer.

Of the "super tourers" offered by the four Japanese rivals, the Suzuki has taken the longest to make its mark. Launched in 1987, it only reached full maturity in 1989, when it was endowed with a revised frame geometry and new suspension. This GSFX uses the engine of the famed GSXR supersport, tempering its fierce nature by adding flexibility. Compact and restrained in style, the GSFX completely conceals its mechanism beneath its fairing. It boasts a unique item of equipment in the shape of a head fairing whose height is, for the very first time on a motorcycle, electrically adjustable.

Unfortunately, the fairing has proved to be too low for many riders.