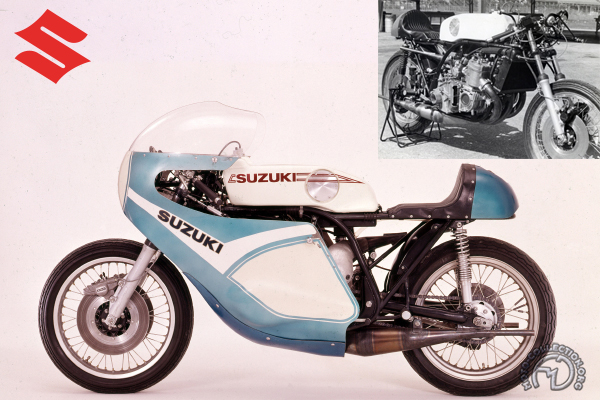 When Honda announced its withdrawal from the World Championships, Suzuki was quick to follow and did not reappear on the racetrack until 1972. Then it entered the seven rounds of the championship created by the American Motorcycle Association, starting with the Daytona 200.

Suzuki returned to the ranks of manufacturers of large capacity bikes with its GT 750. It needed desperately to underpin this model with a sporting record to counter the competition from another three-cylinder twostroke, the explosive Kawasaki H2.

The GT 750 was a massive basis for a racer and the TR 750, which was closely derived from it, was the heaviest machine on the grid. On the other hand, the TR 750 was one of the fastest and most powerful machines, with 107 horsepower at the rear wheel. An MV Agusta of the period developed just 82 hp. Such a combination of weight and power created previously unknown constraints on machine and rider. The main problem with the TR 750 was the tires, which reached 250Â°F on the baking Daytona circuit in Florida. Suzuki's leading riders, Art Bauman and ]ody Nicholas, qualified well, making by far the fastest practice laps: 172 and 166 mph respectively. But it was a long race. Bauman went out with mechanical problems and Nicholas had a flat after leading for 23 laps, leaving the way clear for Don Emde's little (247 lb) TR3 Yamaha 350 twin to snatch a surprise victory.

Suzuki's official return to competition came with the 1972 TR 750, derived from the production GT 750.