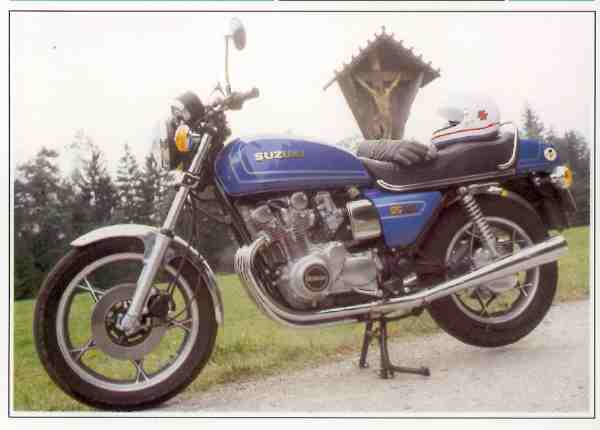 The bike that was too perfect

In 1979, Suzuki doubled its stake by launching this new shaft -drive 850 alongside its established 750 and 1000cc chain-driven models. Even though its conventional styling was similar to the other models, this 850 was aimed at an entirely different market. Its shaft drive and large (5.8 gallons) fuel tank made it a true grand tourer.

Twice Round the Bend

A year before the Katana 650, Suzuki revealed its first shaft-drive machine. In addition, it was a more difficult technical exercise; it involved an extra right-angle drive, and the four-cylinder engine was mounted transversely. Suzuki solved this problem adroitly by creating a transmission of great flexibility.

Though it was a touring machine, the GS850 was not in the least docile. It was nearly as fine -tempered as its chain-driven rival, the GS750. Soberly (but superbly) finished, it was stable at high speed and better-handling than most of its competitors, the GS850's only minor fault lay in its suspension, which was too soft and poorly damped. It certainly merited a more brilliant career than it enjoyed, because the GS850 was elbowed aside first by the 1000G in 1980, then by chopper versions. This range disappeared altogether in 1983. The problem with this practical bike was that it lacked the little spark of excitement necessary for a great commercial success.

Shaft drive returned in full force at the start of the 1980s - it was also seen on the Yamaha XS750 and Honda CX- but progress in chain design quickly sidelined this feature once more.