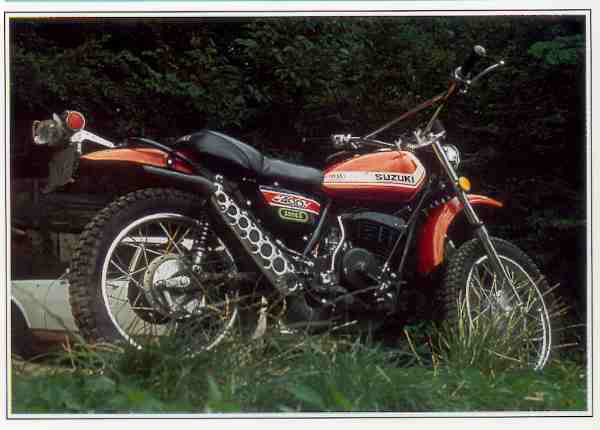 In the shadow of a champion

Suzuki increased its engine size to meet the needs of the American market. Its first big trail bike, the TS400 Apache, was launched in 1972. This handsome, aggressive machine was promoted as a direct descendant of the motocross machine with which Roger de

Coster had won the World Championship.

In fact, the Apache was a little wayward in claiming this heritage. While it had the looks and even the bore and stroke of the Suzuki TM400 client-competition machine, it had little in common with the works RN72 World Champion mount, which was actually a 73x80mm 367cc machine! Oddly enough, while the TS400 Apache and its sibling, the TM400 Cyclone, developed respectively 34 hp at 6000 rpm and 40 hp at 6500 rpm, the 198 lb RN72 was said to develop just 39 hp - they must have been bigger horses!

While the lighter (232 lb) Cyclone had a 21 inch front wheel, the Apache was at first equipped with a 19 inch wheel, a discrepancy that was rectified in 1974. The only other change made before the Apache was replaced by the SP370 four-stroke in 1978 was the color scheme. The Apache quickly revealed its supremacy as a trail bike angled towards rapid off-road riding rather than competing in trials, where it was hampered by its weight and front-end geometry. Its flexible, easily-managed engine made this bike simple to master, just made for long full-bore power slides .

The aggressively sporty TS400, seen here in its original 1972 version, had the principle failing of becoming noisier as it grew older.