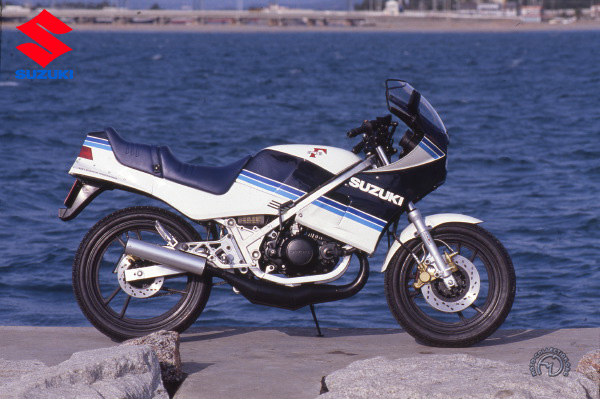 Like any self-respecting replica, the little Suzuki imitated the real-life GP racers as closely as possible. Fitted with a full-skirted fairing, a single seat with removable backrest, dropped handlebars and Suzuki works livery, the result was alarmingly realistic. The illusion continued when you climbed into the saddle: the compactness of the machine, the riding position leaning into the handlebars, the precise handling, the stiffness of the suspension. The RG250 was little short of being a real racing machine.

The bike showed its advantages on the circuit, but on a badly surfaced road its stiffness just led to discomfort, while on the freeway its compact size and small displacement proved to be handicaps. A big boy's toy, the Suzuki was happiest on wellsurfaced winding roads, where its qualities could be exploited to the fullest. The aluminum frame, the adjustable suspension and the triple disc brakes make an ensemble that shines by virtue of its sharp handling. The highly developed water-cooled engine pushed the RG250 along at 112 mph. The downside was a temperamental nature for everyday use, calling for a lot of concentration. But that underlined the ultra-sporty nature of this Suzuki.