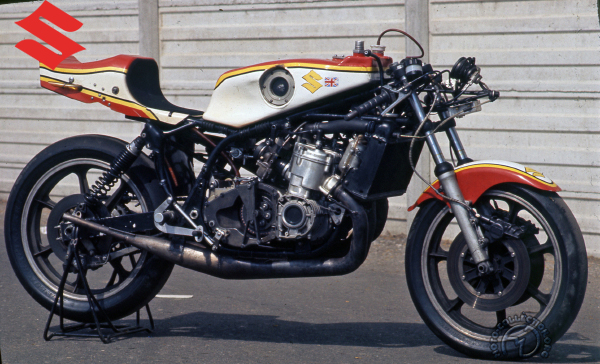 Unveiled just a few weeks after the GT750 from which it was developed, the TR750 showed Suzuki's will to win the Daytona 200, the legendary contest of the early 1970s.

170 mph on the Daytona Circuit

As decreed by the rules of the American Championship) the TR750's three-cylinder water-cooled two-stroke engine was nearstandard, but meticulous preparation had lifted the power output from 70 to 100 hp. This somewhat large and heavy engine was mounted in a totally untried frame. Despite their impressive size and weight, the Suzuki TR750s proved surprisingly fast- the timing radar clocked works rider Art Bauman at over 172 mph - and established the fastest practice times for the 200 Miles, ahead of the Kawasaki H2Rs, the other major freshmen of that 1972 race.

Too Close to Production

The three works TR750s held their lead for lap after lap, but were forced to retire because of mechanical failure or crashes. Nor was the next year's race any better for Suzuki, again overshadowed by the lightweight Yamaha 350s. As a consequence, the TRs continued to evolve and were nudging 125 hp by 1976. But after 1974, the Suzukis' production-derived origins proved an insurmountable handicap when faced with the Yamaha TZ700 and TZ750, which were real racing bikes built in series. Despite everything, these bikes managed to achieve some pretty impressive results, thanks especially to the talents of riders like Barry Sheene, Pat Hennen and John Newbold.

Even when surpassed in power and handling by the Yamaha OW31, the Suzuki TR750 could still put up convincing performances.