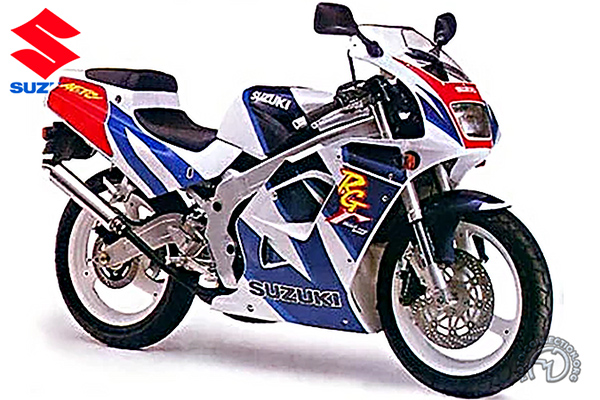 Unveiled in 1985, the Suzuki RG 125, apart from its color schemes, remained unchanged until 1992. Seven years in the field of sporty lightweights is an extremely long time when you think about the proliferation of Italian models. Finally, Suzuki returned strongly to this bitterly disputed key sector.

The new RG 125 wasn't an evolution of the old model, but very definitely an entirely new machine. Its looks were based closely on those of the 250 RGV, with a "banana" swing arm suspension, reversed fork and oversize disc brakes. It's clear that Suzuki has managed to make up the ground lost by the RG without falling into the trap of using prohibitively expensive materials. The double-beam frame is therefore made of steel and, in the name of parts standardization, the RG 125 has many components in common with the GSXR. Moreover, this policy hasn't affected the weight of the RG 125 since it weighs just 276 lb.

The "Super Sport" classification of the RG 125 doesn't prevent it from being comfortably usable by all shapes and sizes of rider. Its engine is deliciously flexible while preserving the free-revving characteristics so typical of lightweight two-stroke power units. So it can truly be said without fear of contradiction that the RG 125 has attained its design objectives, while its pricing places it in an extremely strong position vis-a-vis its Italian rivals.

In the face of its superb- but undeniably expensive- Italian rivals, the Suzuki RG 125 offers an exciting choice at a reasonable price.