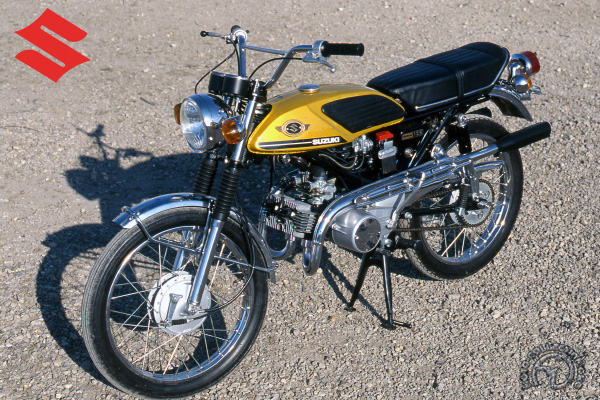 All things considered, very few motorcycles appear that create a radically different style. On that ground alone, the Suzuki T90/T125 deserve their own niche in history.

Launched in Japan in 1969, in 90 and 125cc versions, these Suzukis stood out from all the existing models by their styling and the concept. The T90 had the distinction of being the only twin in its category. The T90 and T125 were long, lean and well-proportioned. It had unit-construction engines whose cylinder fins were echoed by grooving on the

crankcase, high-level exhausts and razoredged fuel-tanks whose lines were prolonged into the dual seat. The whole flow of the lines was angular, horizontal, giving the T90/T125 a great sense of movement. It was one of the most original styles ever created in Japan.

However handsome the Suzukis may have been, the T90/T125 series made the error of not following the trends of the moment. The vogue for street scramblers with touring engines and raised exhausts was being replaced by sporting roadsters on more conventional lines or phony trails bikes with single-cylinder engines and better off-road manners. The public preferred the YAS Yamaha - the marque's best twin-cylinder in this category, with at least 1.2 more horsepower from the same-size engine, or Yamaha's AT1, first single of a famous line. The T90 Wolf and T125 Flying Leopard remained in production until 1973.

The Wolf and Flying Leopard had truly original styling; this pre-production Wolf T90 has a little plastic bug-deflector screen above the headlamp.