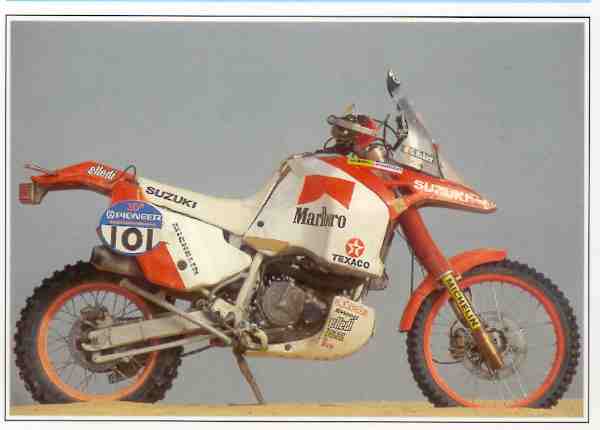 Though twins had been the dominant force in trans-African events for seven years, Suzuki went on the rally offensive with a single. But it was no ordinaty single.

In 1987, Suzuki made an official entry in the Paris-Dakar with a prototype 650 single, which had nothing in common with the production 600 DR. It employed the combined air/oil cooling of the supersport GSXR multi-cylinders. The following year, for the tenth running of the famed rally, Suzuki exploded a real bombshell by unveiling its extraordinary prototype DR Zeta, still a single, but displacing over 800cc!

Compared with the big, heavy twins, the Suzuki DR Zeta had the advantages of compactness and a good power/weight ratio. While, with a power rating of 65 hp, it was giving away some 10 hp to the twins, it usefully scaled 60-70 lb less. Suzuki's 1988 team boss Gaston Rahier (winner in 1984-85 on a BMW) knew from experience that towards the end of a 375 mile stage, ease of management and lack of tiredness were big advantages. Sadly, machine preparation (it overheated and suffered from vapor lock), coupled with unfavorable race conditions and, above all the fact that the Paris-Dakar had become a real sprint across the desert never allowed the DR Zeta to demonstrate the soundness of its conception.