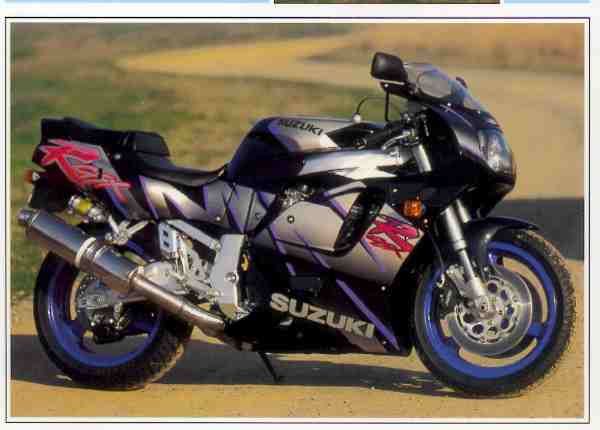 The GSXR 750 of 1985 started a revolution by laying down the guidelines for the Replica concept. The second generation of this model was happy to repeat the same tactics that had succeeded with its predecessor.

If It Ain't Broke

Even though the latest GSXR had little in common with the previous model, Suzuki did make the new bike resemble the old one. One can understand this caution when one realizes how successful these bikes were. Between 1985-91, world sales of the GSXR 750 totaled 95,000 - an exceptional figure for such a specialized model.

Rather than risk breaking the spell, the designers followed the conservative route. However, things are very different beneath the surface: Suzuki has abandoned air/ oil cooling of the four-cylinder power unit in favor of a water-cooled block, apparently to give greater potential for competition tuning. Also totally reworked, the chassis takes advantage of the most modern construction methods, though there's very little difference either in appearance or geometry between it and its predecessor. It's only when you eventually take the controls that the true differences shine out. This latest model is easier to ride, thanks to its smoother power unit: its chassis is better attuned to road riding, its equipment is more comprehensive and the standard of finish is better. This new Suzuki still reflects the true spirit of theoriginal GSXR.

Though tecbnically it has virtually nothing in common with its predecessor. the 1992 Suzuki GSXR does everything it can to retain its style.