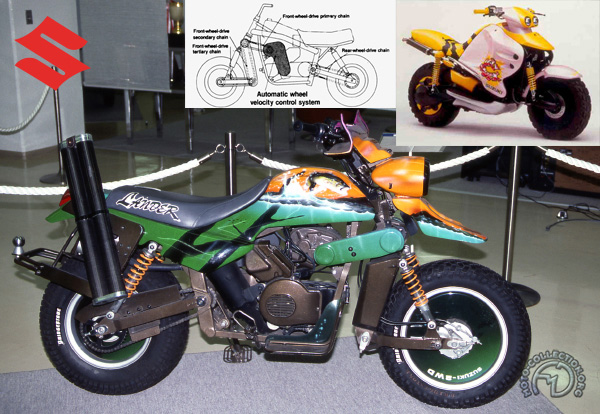 The 1991 Tokyo Show was dominated by two-wheel-drive motorcycles, a field in which at least three of the major Japanese manufacturers are carrying out intensive research.

Honda and Suzuki showed a number of prototypes using different applications of 2x2 technology, while Yamaha claimed to be studying this technology - and that of twowheel

steering - in depth. But it was Suzuki which had the most fully-finished prototypes in 1991 shows - the XF5 and the astounding "Ugly Duck" (which really lived up to its unkind name).

The Ugly Duck was so ugly it was appealing. It seemed to have ridden straight out of Toon Town! And it didn't happen by accident. The Japanese factories believe strongly that the extra rideability conferred by two-wheel drive will attract new customers who are not necessarily motorcycle buffs, particularly Americans who love leisure vehicles which can be used by the whole family. A motorbike like the Ugly Duck could easily replace the off-road trikes which have been banned for safety reasons, yet which constituted a market of 500,000 units a year in the mid-1980s. On the Ugly Duck and the XF4 Lander, another Suzuki prototype revealed at the same show, the two-wheel drive is permanent. On the XF5, an automatic clutch only drives the front wheel when grip is low. The transmission is automatic, making the Ugly Duck as easy as possible to ride, and an ample dual seat emphasizes its leisure role.

Transmission: automatic; front-wheel drive by triple chains and shaft in the steering column, then gear-train to hub with electronic speed control; chain drive to rear wheel

The Ugly Duck was one three Suzuki two-wheel-drive prototypes shown during 1991, underlining the japanese giant's commitment to this type of transmission.

All details concerning "Ugly Duck" and many other 2-wheel-drive motorcycles in the book "Unusual Motorcycles" by FranĂ§ois-Marie Dumas. Haynes edition.