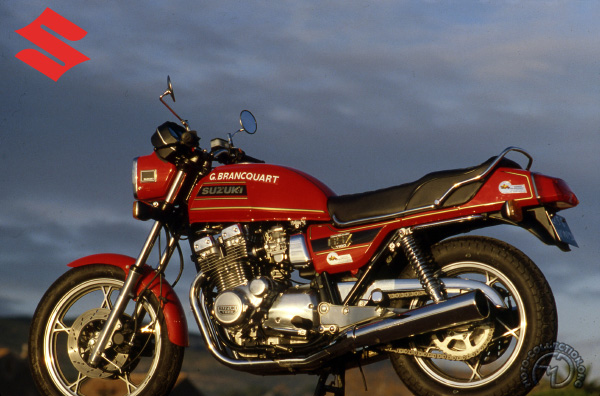 Four valve with an italian patent

In 1980, Suzuki - which had already established a solid reputation with its 750, 850 and 1000cc GS four-cylinder models took another step forward with its GSX 750 and 1100, which had four rocker-operated valves per cylinder. They were state-of-theart. with an undeniable character. It was kept secret for a long time that Suzuki had bought this patented layout from the italian engineer Piatti who will receive one dollar for each Suzuki 4-valve engine sold: a fortune!. The more innovative of the pair was the 750, which was the first Suzuki four-stroke with a one-piece forged crankshaft and split big-end bearings. The 1100 stayed faithful to the marque's roots in two-stroke technology with a built-up crank and needle-bearing big-ends.

Original in appearance and luxuriously equipped, the GSX was comparable with the Yamaha XS 1100 in combining high performance with excellent comfort for rider.

Massive and heavy (573 lb ready to roll), the GSX 1100 was nonetheless compact and low in the saddle. flexible and well-balanced, it was easy to handle and revealed its full potential as a long-distance mount. Its 100 hp were always controllable, while its excellent roadholding permitted high cruising speeds that were in no way diminished by the lack of a fairing. Less sporty as well as 18 lb heavier than the 750, the 1100 had a longer stride and phenomenal engine flexibility.

Sadly, it came on the scene at a time when customers were looking increasingly towards the outright performance offered by the supersports bikes, and its sales failed to reflect the very real qualities that it offered at a genuinely competitive price.