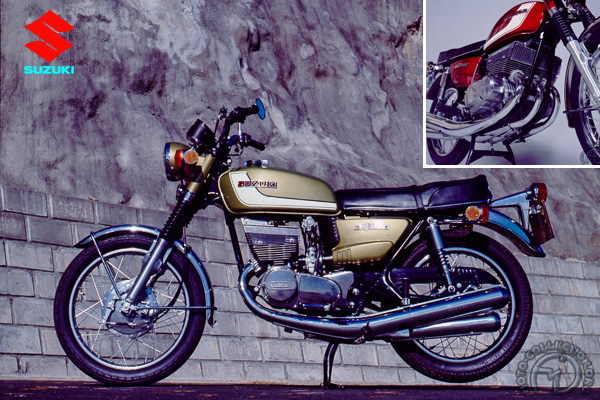 Too civilized for the public

Scarcely a year after it had launched the GT750, Suzuki unveiled new 380 and 550cc models, with water-cooled three-cylinder engines. Suzuki took a prudent course with

flexible, silent and comfortable-looking bikes, though - .similar to the 750 Â– this orienration towards touring rather than sporty virtues would prove a handicap to sales of the GT380 and 550. The public was more inclined to follow the fashionable trend towards high-performance machinery.

The 380 also suffered-like most Suzukis of its day - from skimpy rear suspension and inadequate ground clearance on curves. But Suzuki committed the sin of having initially reserved front disc braking for the 550. Even though this fault was rectified in 1972, the GT380, a reliable machine that was a pleasure to ride, never achieved the success it desetved. The GT380 and 550 disappeared in 1977 when Suzuki, the unrivaled twostroke specialist, was forced to switch to fourstrokes by pollution regulations.

Like the other Suzuki two-strokes launched from 1972, the GT380 was distinguished by a complex air-cooling system known as RAM (Ram Air System), which used a kind of scoop to direct cold air across the cylinder head. Its engine, particularly quiet, developed its power across the 1000-7000 rpm band without hesitation, with a well-matched six-speed (five speeds on the 550) gearbox and a remarkable fuel economy of 40 mpg.