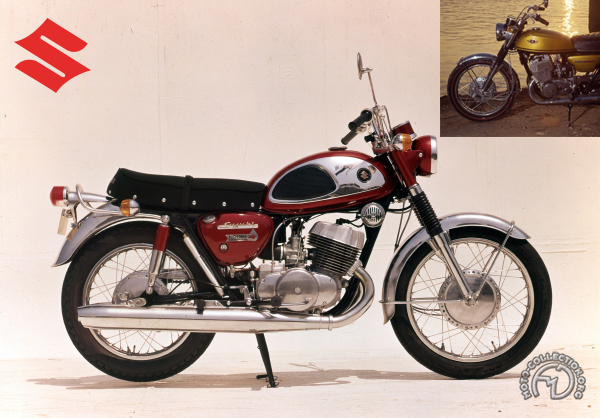 When the T500 was unveiled in 1967, the experts hedged their bets. While it was - along with the 650 Kawasaki W1- the most powerful Japanese production bike, it was also a two-stroke. Could it swallow all that power? What would be its consumption of gas, oil and spark plugs? Most importantly, would such a machine prove reliable?

Certainly, if the T500 wasn't the first large capacity two-stroke - there had been a 650 Scott previously- it was the first to flirt with such levels of performance. Attention was given to cooling, with the exhaust pipes splayed outwards to allow cool air to play directly on to the cylinders, and the importance accorded to lubrication (with a more highly developed pressure lubrication system than that of Yamaha) allowed the T500 to establish itself as a genuinely sporty bike beneath its excessively sober raiment.

Suzuki had been particularly careful to set the engine well fotward in the frame to limit the chances of doing wheelies when acceleraling; the long-wheelbase gave the T500 a particularly appealing look. After a natural period of mistrust, the career of the big Suzuki two-stroke really took off Â– until the arrival of even more spectacular competitors. Despite its conservative bottom-end design, the T500 even enjoyed a certain amount of success: it finished second at Daytona in 1969 and- above all - became

A straightforward, reliable high-performer, the T500 Suzuki is shown in its original1968 version