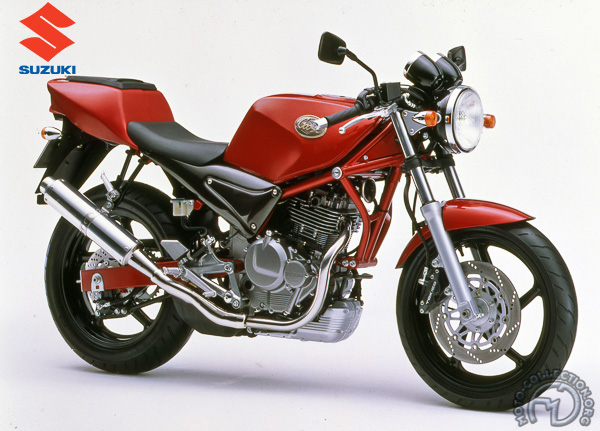 In their constant search for new market niches, Japanese manufacturers have tried to revive the taste for simple motorcycles in motorcyclists who have become bored (and financially ruined) by the ceaseless flow of replica racers, which are increasingly less usable on the highway. After its sporty Bandit four-cylinder- a huge success in its home market- Suzuki moved closer to a light sports machine by entering a fleld it had neglected - the road-going single. Suzuki based the Goose on the engine of the 350 DR off-roader and copied the methods adopted by leading tuners of racing singles (a favorite formula in Japan, with which Suzuki produced the 40 hp Goose-R) by endowing it with every possible refinement while retaining relatively low-cost (tubular-steel frame and swing arm) construction.

The stunning result made this hike a direct competitor for the hitherto dominant machine in its class in .Japan - the 400cc Yamaha SRX. More modern, the Goose offered a finish that was as sober as it was superb, a marriage of modernism and the aesthetic appeal of the big singles of the past. Light and exceptionally stable, the Goose recalled the famous old Ducati 350 Desmo with the same good temperament and spectacular speed for its engine size (though it's true that this was obtained at the cost of low-speed flexibility). Be that as it may, this was first and foremost a bike made for enjoyment, and the only shame is that it was initially reserved for the Japanese market.

The Goose took its name from the kick-up in the backrest,fancifully thought to resemble the tail of a goose!