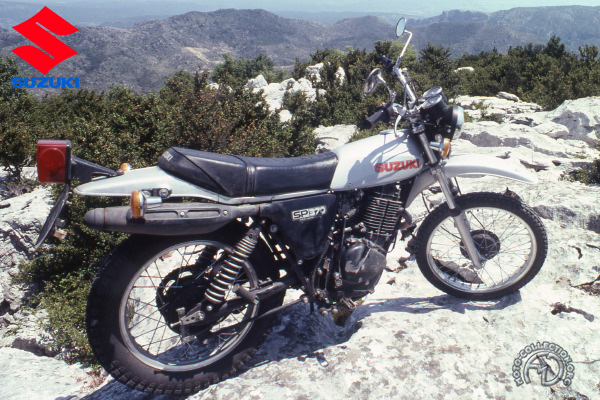 Suzuki was as ahead of its time with its twostrokes as it was slow ro rurn to four-strokes. The Hamamatsu factory only built its first offroad single-cylinder four-stroke, the SP 370, in 1978. Slim, sporty and full of character, this motorcycle had a lot to overcome in creating a reputation. Its hybrid capacity put it squarely between the 350 and 500 classes, and its rivals included the Yamaha 500 XT, launched end of 1975, and the 250 Honda XLS and XR, joined in 1978, by the 500.

While the other major marques were competing to bring out technical innovations, Suzuki sensibly began with modem, but wellproven, solutions. Tastefully finished in red or silver-gray, the SP 370 used a frame designed for the marque's two-stroke models, a simple double-cradle unit. While Yamaha had opted for dry-sump lubrication, Suzuki preferred a wet-sump, which explains the taller engine.

Lively and free-revving, this new single was an ideal urban mount, where it also revealed its fine handling. In contrast, it was not an ideal freeway bike, where it peaked at just over 80 mph to the accompaniment of strong vibrations. Its engine's lack of inertia led to transmission snatch below 3000 rpm. Though the SP was not comfonable, it was unquestionably sporty. Practical on the highway, it was handicapped in difficult going by the lack of protection for its engine. In brief, this first attempt lacked sufficient versatility, and it was not until the launch of the DR series that Suzuki became truly competitive.

Sober and elegant, the original Suzuki four-stroke off-roader was not short of character, but it was lacking in versatility.