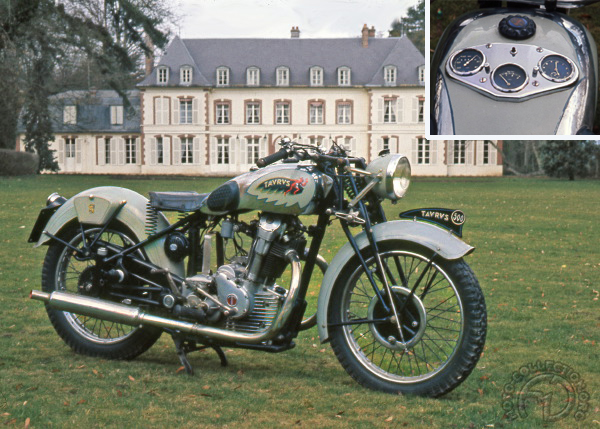 Germanic in appearance and luxuriously equipped, the Taurus 500 offered original and sophisticated technology. The unit-constructed engine, designed by Vittorio Guerzoni, combined all the "must haves" of the day: an overhead-camshaft driven by shaft-and-bevel and exposed valve springs.

Alongside this twin-port Sport version, claimed to be capable of over 70 mph, Taurus added a single-port Super Sport, whose top speed was said Â– no doubt optimistically Â– to be 93 mph.

All the models were offered with the option of rear suspension and the choice of a special carburetor and an auxiliary oil tank. The rear end of the rigid triangulated swing arm which replaced the forged-steel arm of previous years) slid in curved guides with two easily-adjustable friction dampers. Springing was taken care of by multiple element torsion bars, acting as a pivot for the suspension arm. Though the Milan-based company was founded in 1901, Taurus didn't turn to motorcycle production until 1933, working in conjunction with Guerzoni, famed for his Mignon engines. From 1933 through 1939, Taurus Â– also known as MG-Taurus Â– built overhead-valve and overhead-cam 250s and overhead-cam 500s. The latter were replaced in 1938 by the overhead-valve 500 TN and the TS, with a chain-driven twin-cam 500 engine. After WWII, Taurus made 50cc machines, followed by 160cc two-strokes and 200cc four-strokes, before going out of business in 1966.