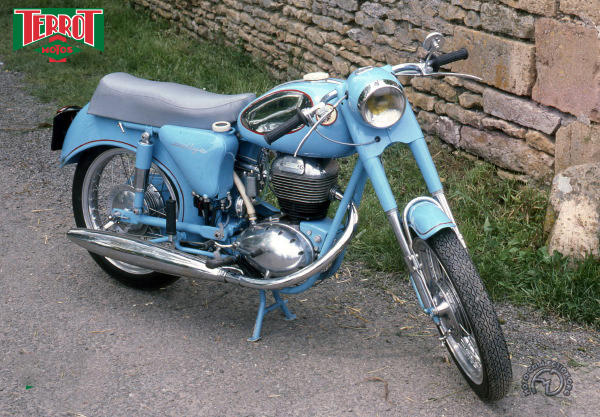 Terrot, one of the most famous French marques, disappeared in 1961 just after it had unveiled a sports motorcycle that was a worthy response to the Italian challenge. It was an irony that the last Terrots should be built under the sign of the marqueÂ’s long-time major competitor: Peugeot.

After 1945, Dijon-based Terrot concentrated on the 125-175cc sector with a series of machines based on the 100cc overhead-valve four-stroke created in 1939 by engineer Edmond Padovani. But it wasn't until the 1957 Paris Show that Terrot brought out real sports versions: the 125 Ténor, 175 Super Ténor and the 175 Rally. But sadly it was also the last new Terrot and the last French sporting four-stroke. Since 1954 the European motorcycle market had been in full decline.

An Affordable Sports Bike Terrot, in financial difficulty, was taken over by Peugeot. Manufacture was transferred to the Automoto factory in Saint Etienne, only to close down altogether in 1961. A real toprank sports bike, the Rally was marketed at the very competitive price of 254,000 Francs in 1958, thanks to a high level of standardization with the other 175cc models in the range. Totally reliable, it developed an extra 4.5 hp, revved as high as 7700 rpm and was good for a genuine 78 mph. Luxuriously finished and well-equipped, the Rally differed from the other Terrot 175 in many details Â– excellent 6-inch full-hub brakes, aluminum rims and a reinforced fork (which was, nevertheless, on the light side).

The last Terrot was a worthy competitor for the Italian Morini Settebello.