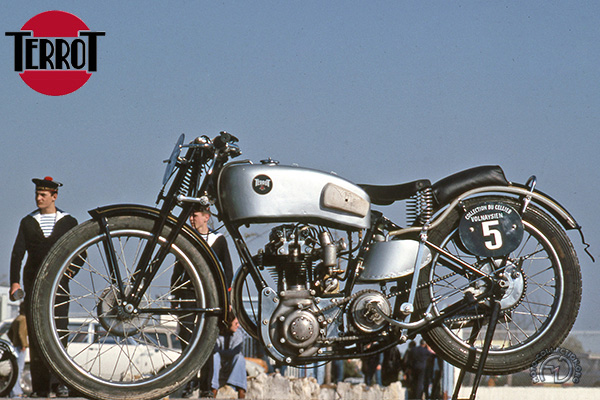 Terrot of Dijon was one of the pioneers of the French motorcycle industry. By the mid-Thirties, it had become France's leading manufacturer, selling 200,000 bikes after the end of World War II.

A full competition program was undertaken to boost the company's image in that golden age for the two-wheeler. The well-known French rider Padovani, a one-time winner of the French Grand Prix, was appointed head of the research department. In the company's wide range of choices, Terrot offered a series of "customer competition" models under the "CP" designation.

These were available at moderate prices (for instance, the 1937 350 HCP cost just 11 percent more than the normal road-going sports 350). Terrot became the most popular French competition name in the 250, 350, and 500cc categories. Although Terrot didn't enjoy the international success of British bikes like Norton or Velocette, the Dijon firm added 13 French championships to its trophy case. For the works racers, built in very limited numbers, Terrot solved certain technical problems associated with high engine speeds Â– like cast-iron flywheels that burst! Â– by adding first one, then two extra main bearings to stiffen the crank. Rarely used on the 500cc and infrequently adopted on the 250, this technique was used mainly on the Terrot 350cc engine.