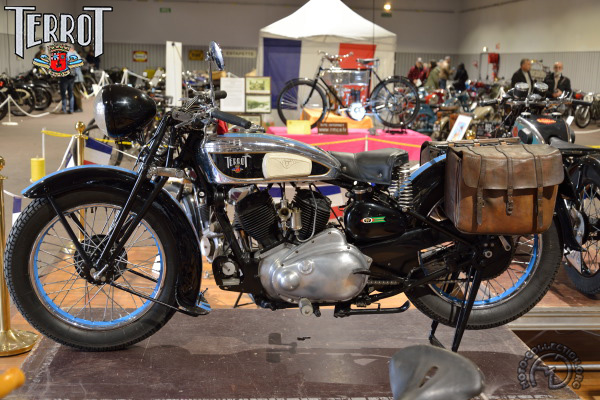 Aimed at the military market

After WWI, the Dijon-based Terrot company got back on its feet slowly. Finally, in 1924, it really took off. The full revival of Terrot was achieved in 1930, when the company began making its own power units. All that was missing was a prestigious model, and that came along in 1934: the Type VA.

Terrot's first stab at making a flagship model had been made in 1931 with the Type V, powered by a 680cc JAP V-twin Â– but JAP had stopped making that particular engine. Terrot, which had its eyes on the market for large-capacity military machines capable of hauling a heavy sidecar, began designing its own V-twin, unveiled in 1934 as the 750 VA.

To keep costs down, Terrot used as many existing parts as possible, so the bottom end was derived from that of the 500 RL and RSS, while the cylinders and heads were closely related to those of the 350 side-valve HLG with enclosed valves. The frame was not much different from that of the marque's 500. No effort had been made to achieve high performance, which did not interest the military, solely concerned with reliability. As for the civilian clientele, it was restricted to sidecar users, who proved more interested in the lower-priced 750 and 1000cc René-Gillets. Because of this, sales of the 750 VA were restricted, even though the model remained in the catalogue until 1939. Terrot, however, was compensated for the poor sales of the civilian model by orders from the military for its VATT.