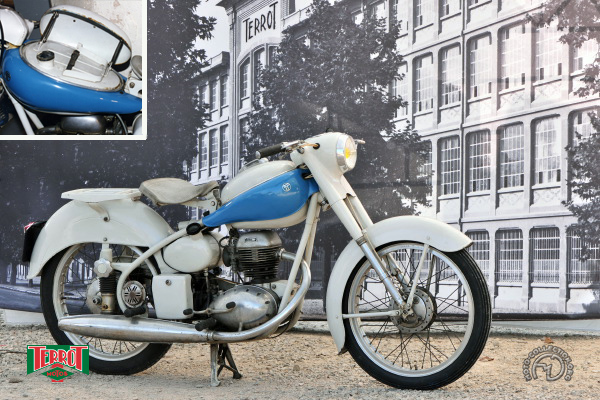 After five years' interruption due to the German Occupation during WWII, the 1946 Paris Motorcycle Salon wasn't a show for buying or selling, but a showcase for the industry. It gave the French a chance to see the shape of two-wheelers to come.

Terrot of Dijon unveiled its new "EP" lightweight, a 125cc development of a 98cc prototype of 1939, created by Edmond Padovani of the in-house design department. It had a unit-constructed overhead-valve powerplant in a conventional cradle frame, with girder front forks.

This Motorette went into production in 1947. At the second postwar Paris show, it was exhibited alongside the SEP, a prototype with a double cradle frame, plunger rear suspension and a fuel tank incorporating a toolbox. The only feature which actually made production was its rear suspension, adjustable for solo or two-up use, which ultimately equipped the RGST 500. After years of inactivity, Terrot suddenly sprang to life in 1957, with its new Fleuron-Tournoi-Ténor-Rallye range. The old SEP was dusted off and updated with modern components-streamlined front fork, heavily-domed front and back mudguards, and an engine from the new Tenace, the utility model from the new range. Though the new SEP was now right up to date in appearance, it still remained a styling exercise that never made production.

Unveiled as a utility autobike in 1917, the SEP prototype was brought up to date with new engine, mudguards and engine ten years later, but still remained a prototype.