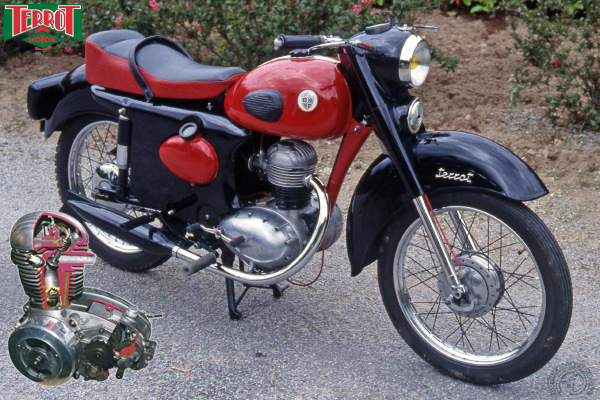 The beginning of a nice end

In 1956, the Terrot range began to take on a new look. The 50cc cyclemotor had been a setback, the scooter was selling badly, the 250cc OSSD was dull and the 500cc RGST looked like it was something off the Ark.

The influence of Peugeot was beginning to be felt, too. The new Terrot bicycle was actually built in the Peugeot works, and the 100cc Villiers autocycle was a common production with Peugeot, Automoto and Monet-Goyon. The ETD overhead-valve four-stroke autocycle was also known as the EMS or ETDS according to specification, with rear suspension on the top-of-the-range version, and in 1956, Terrot launched two new 125cc lightweights that used the well-proven powertrain of the ETD: the EDV and EDL.

Last of the Line

The styling was new, a break with the austere traditions of the Dijon Terrot factory. The models were distinguished by their two-tone paint jobs: red and black for the EDV (ignition by flywheel magneto), ivory and red for the EDL (coil-and-battery ignition). The telescopic fork was faired in, including the steering head, horn and headlamp, flowing into a deep-sprung mudguard. The sides were covered by two big lateral panels topped by a two-tone dual seat and the wheels were noticeably smaller than before. But the relaunch of these two lightweights turned out to be the beginning of the end at Terrot with models like the Fleuron, Tournoi, Ténor and Â– especially Â– the Rallye.

This elegant 125 EDV symbolized the short-lived rebirth of Terrot. Originally, its frame would have been black, not red as on this restored example.