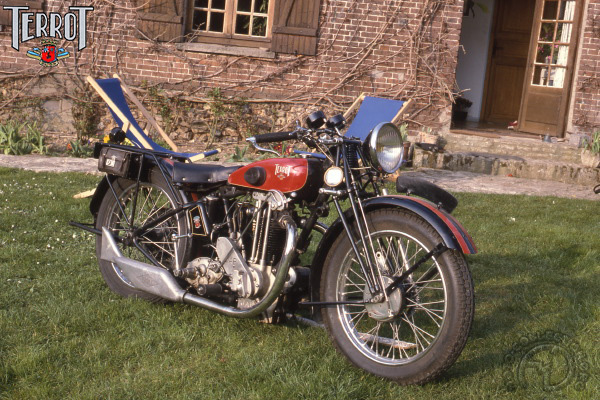 This Terrot is a real pitfall for the collector. Though it's perfectly genuine, officially it never existed! The mighty firm from Dijon certainly used JAP engines in its top-of-the-range models until the beginning of 1932, but after that, it used its own-make 500cc engine.

To satisfy a special customer who swore by the British engines (and with good reason), this one-off 500 NSSL was built in 1933. The 483cc JAP engine was particularly remarkable in using a genuine dry-sump lubrication system with a double pump housed in the sump, which sent the oil to the crucial points and returned it to the separate oil tank.

This machine was originally equipped with the classic Terrot three-speed gearbox. But though that was sufficient for the French engines, it was under-dimensioned for the 21 hp delivered by the British power unit. After several gearboxes had exploded beneath his feet, the disgruntled client was finally pacified by the fitting of a specially-built racing four-speed transmission. The only production Terrot that had a four-speed transmission was the semi-unit-constructed RSS model (which had a specially-designed crankcase), but here an entirely separate gearbox was employed. Terrot had launched its first in-house engine on the side-valve 500 RL in 1930, followed by the overhead-valve, semi-unit-constructed RSS in 1932, which replaced the JAP-engined NSS (which Terrot made not the slightest effort to promote, making this surviving last-of-the-line NSSL all the more rare).

This one-off machine was the very last Terrot to have a bought-in engine, built to the order of a very choosy customer.