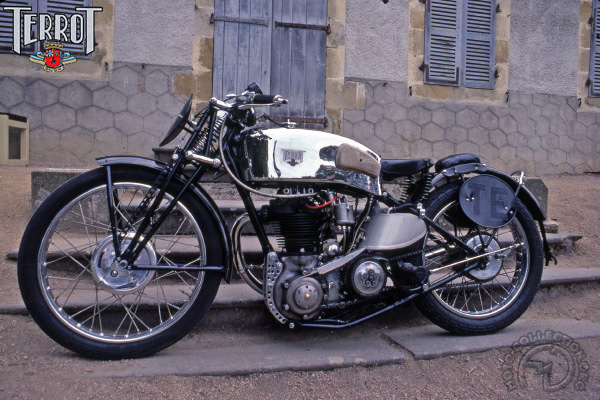 Launched in 1931, the 500 Terrot Type RCP racer was continuously developed over a seven-year period to such an extent that the first and last models Â– both works machines Â– had hardly any components in common. Sadly, it wasn't the final version that was most successful, but the first. Nevertheless, the "4-bearing" version was the best-looking of all!

In 1933, Martin won the French title with a virtually identical RCP. But the 1934 version that gave Boetch victory in the championship was completely changed. It had a distinctive fuel tank, a new gearbox with a selector pedal and above all, a new engine with a single exhaust port. Its crankshaft was carried in four bearings, the fourth being external to the output pinion to eliminate any whip in the shaft. In 1935, the final development used magnesium for the crankcase castings and a more generously-finned cylinder head assembly, retained by five studs instead of the four pillars used until then. This "four-bearing, five-stud" engine was the best-looking version. But in 1935, the highest revving engine with the most hp was the one that won. Sadly, the ohv Terrot, which had a tendency to break connecting rods at high speeds, was regularly beaten by the ohc KÂśhler-Escoffiers.

Though its roadholding, braking and gear-change were all excellent, the 1935 Terrot RCP was ultimately uncompetitive because its engine was not sufficiently modem.