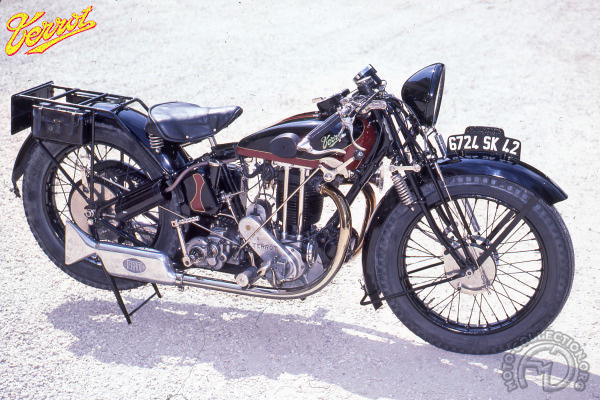 Return to the big league

Terrot returned to the 500cc category in 1927, following Monet-Goyon, the leading French constructor. Terrot again challenged Dollar and Gnome & RhÃīne, but overhauled Alcyon, Motobécane and Peugeot. A rapid evolution from a flat-tank to a saddle-tank followed. In the summer of 1929, one of the best 500s of the period was produced Â the NSSO 2.

Terrot, which had been a leading manufacturer in 1914, was reduced to a shadow in 1919 since its property had been sequestered during WWI. After the war, the Dijon-based firm could only offer a skeleton range: in 1924 three small two-stroke models of 270, 175 and 147cc. The firm 's renaissance really began in 1927, with the arrival of 250 and 350cc four-strokes, but what was still lacking was a 500.

This was achieved in 1927, with the 500 JAP-engined Model. However, this had an outdated cycle part with an unfashionable flat-tank. Terror's return as a front-rank manufacturer was heralded by the saddle-tank 500s, whose top model was the NSSO 2. For this 500, Terrot took the best elements of its 350 which had become Champion of France: a robust frame, an elegant saddle-tank, a gearbox with a four-point attachment to the frame guaranteeing perfect chain alignment and Druid type forks with limited travel. All that was missing was the powerful AYA front brake Â but that was so expensive that Terrot had decided not to use it. In compensation, the JAP engine made this a lively and reliable 500.

Handsome but costly, the Terrot NSSO 2 was the peak of the 1920s range.