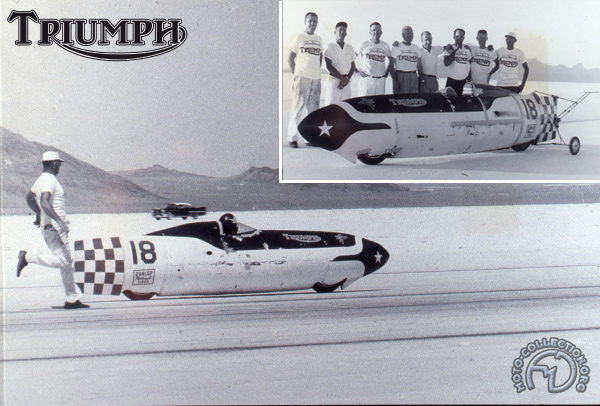 The American Motorcycle Association and the Fédération Internationale de Motocyclisme have always resolutely refused to recognize records obtained under the regulations of the rival organization. Some American records set in the early years of this century were optimistic Â– particularly the highly dubious 130mph claim by aviation pioneer Glenn Curtiss on his massive V8 bike in 1909. However, since the 1920s, AMA timings have been scrupulously accurate.

Usually the riders and constructors suffer from this silly dispute. In one case when in 1955 Johnny Allen exceeded 193 mph at Bonneville in his cigar-shaped Triumph-powered streamliner, the FIM refused to homologate his record, even though it was far and away the fastest speed in the world at the time. When Herz's supercharged NSU averaged over 210 mph at Bonneville the next year, Allen replied with a speed of 214 mph. Again, the FIM refused to recognize it.

The bitter Allen tried again in 1959, but a 200 mph crash dampened his enthusiasm. In 1962 a truck driver from Los Angeles named Bill Johnson came to Bonneville with another 650cc Triumph-powered streamliner and set a new record of 224.57 mph. This time it was recognized, and stood until 1966, when Detroit Triumph dealer Bob Leppan hit 245.66 mph in his Gyronaut X-1, powered by two 650 Triumph engines. Allen and Johnson, however, had relied on a single Triumph 650, modified to run on alcohol.

Though the FIM refused to recognize the world speed records set by Johnny AllenÂ’s Triumph, that doesnÂ’t make them any less valid Â– or diminish AllenÂ’s courage.