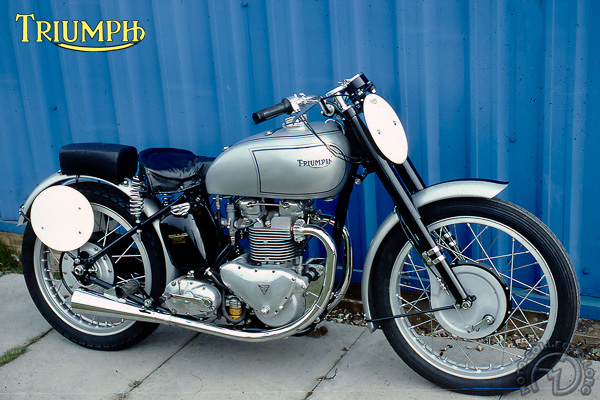 Birth of a bitza

A dedicated road racer launched in 1948, the Grand Prix Triumph was born out of the company's wartime production of airborne generator sets.

Bombed out of their factory during WWII, Triumph moved into a new factory at Meriden Â– the reputed geographical center of England. Here they built a special lightweight version of the 500 Speed Twin engine designed by Edward Turner. Intended

to recharge the batteries of Royal Air Force bombers in flight, this "Airborne Auxiliary Power Plant" had a silicon-aluminum cylinders and head.

It was during a trip to the US that Triumph engineer Freddie Clarke conceived the idea of fitting the all-alloy AAPP engine into the frame of a Tiger 100 equipped with Turner's new sprung rear hub. This bitza (a nickname from "bits of this, bits of that") weighed under 310 lb, developed 10 hp more than the Tiger 100 and even 5 hp more than the all conquering Manx Norton, which was also badly handicapped by the poisonous low-octane gas available in 1946. Dublin fanner Ernie Lyons won the first postwar race in the Isle of Man. The Manx Grand Prix, run in mist and rain, eliminated the favorites. Even when the engine mounts broke, causing a terrible skid on the last Iap, it didn't stop Lyons. Triumph attributed the incident to "loss of attention by the rider." Fast but hairy, the Grand Prix won many minor races but was only available from 1948 and 1952.

Production of the fast but tricky Triumph Grand Prix reached only 175 units, most of which were exported to the United States.