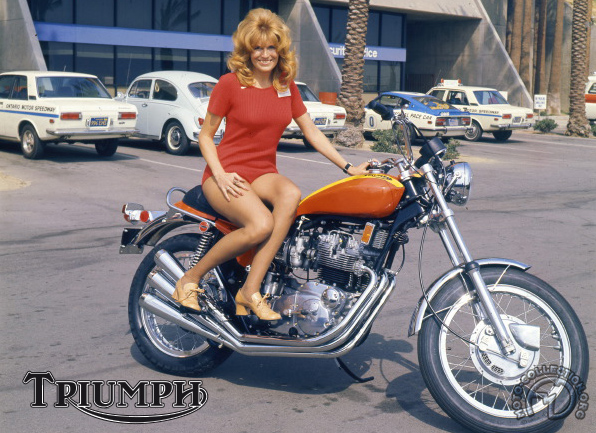 Were the British motorcycle manufacturers too conservative or did the Japanese catch them napping? Whatever it was, the arrival of the Honda 750 in 1969 was followed by a flood of other multicylinder bikes that dealt a devastating blow to the British industry.

In one last desperate effort, the leading British makers attempted to re- establish themselves, particularly in what had been their leading export market, the United States. One of the most spectacular ventures in this field by the Triumph-BSA group was the 1972 Hurricane. Starting with the three- cylinder Triumph launched in 1968, the well-known American designer Craig Vetter proved remarkably successful in combining contemporary American styling with

The naked engine kept no secrets, with three separate exhaust systems on the right of the machine giving the Hurricane a fabulous sporting appearance. It's said that its makers banned photos of the left side of the Hurricane, devoid of exhaust pipes, from being published. The tiny (2.4 gallons) teardrop-shaped tank and the lengthened front forks placed the Hurricane firmly among the ranks of the then-fashionable choppers. Produced in limited numbers, the Triumph Hurricane is today highly collectible.