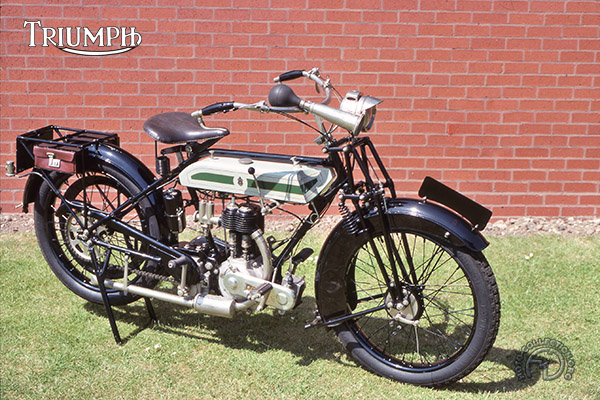 The machine that made Triumph's name

Founded by German-born Siegfried Bettmann, Triumph began making bicycles in Coventry in 1885. They turned to motorcycles in 1902, though it was not until 1905 that the first Triumph with an original engine appeared. It also introduced Triumph's own design of sprung fork. By 1906, this robust and reliable 250cc machine had established a fine name and some 500 were sold that season, revitalizing the British industry.

The Roadster model had a longer wheelbase, pedaling gear and Â– as an option Â– a multiplate hub clutch. The TT model had a slightly shorter wheelbase and no clutch or pedalling gear, so a run-and-jump-on start was called for. Said the catalogue: "Two sets of foot rests are provided to allow the rider to assume a racing or upright position." Triumph offered an adjustable belt pulley that could be altered when the machine was at rest to give final drive ratios of 3.75-5:1 (roadster) or 3.25-4.5:1 (racer). This indestructible 500 was the dominant force in the single-cylinder class of the Tourist Trophy Race.

Available either in "roadster" or "racer" trim, the 3 1/2 hp Triumph Tourist Trophy was one of the first "over-the-counter" replicas of a works racer.