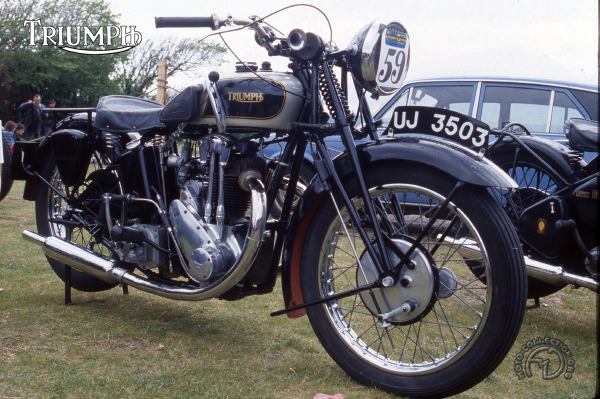 The first overhead-valve Triumph was an impressive four-valve 500, built in the 1920s. Rather than follow this brilliant lead, Triumph continued the 500 line with the economy side-valve Model P, which proved to be a stunning sales success, with nearly 30,000 produced in 1929. In 1932, the brilliant designer Val Page joined Triumph from Ariel, and created an entirely new range of singles from 250-600cc, as well as Triumph's first vertical twin, the 650cc Model 6/1.

A Range of Singles

Page's singles remained in production until the outbreak of war. The 250 and 500 were overhead-valve designs, while the 550 and 600cc machines were side-valve.

Between 1934 and 1936 the flagship 500 range consisted of four models: 5/2 Standard, 5/4 De Luxe, 5/5 Sport and 5/10 Racing. When the parent company, wanting to concentrate on automobiles, tried to close the motorcycle business clown, Jack Sangster Ā– who had taken over Ariel Ā– became boss of Triumph, and put designer Edward Turner in charge. His first move was to revamp Page's range, and a new silver and chrome color scheme gave these reliable machines a touch of glamour in 1936. The vertical twin was dropped, and the singles were renamed "Tiger 70," "Tiger 80" and "Tiger 90" and enjoyed well-merited success. Val Page singles were well-liked machines, with twin-port heads and double-cradle frames. There was even a very special racer with magnesium engine castings, ridden by Tommy Spann in the 1934 TT but it failed to finish.

Triumph advertised that its big singles gave "faultless riding.Ā” This 500 De Luxe is typical of the popular British touring bikes of the mid-1930s.