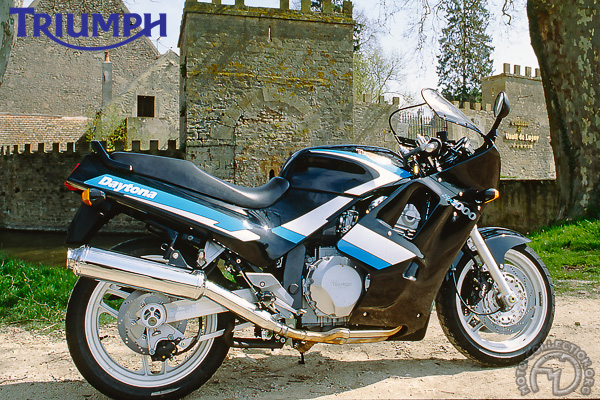 The new Triumph range, which returned to the scene in 1990, consisted of six models with three- or four-cylinder engines of up to 1200cc, and were available in more or less sporty trim. The flagship of the, sporty range was the 1000ce Daytona four, and a 750 differing only in the use of a. three-cylinder power unit.

The Daytona was certainly a sports mount due to its riding position with high-set foot rests and low-set dropped handlebars (which incidentally imposed an excessively large turning circle). The picture was enhanced by its wide range of suspension adjustments and its four-piston front brake calipers. But apart from this equipment, the Daytona was above all an excellent road machine. It lacked nothing to qualify it as a rival to the brilliant Â– and far more exclusive Â– Japanese supersport bikes like the Yamaha EZR and Suzuki GSXR.

With comfortable suspension (which compensated for the riding position) and a highly flexible power unit bursting with torque, the 1000 Daytona is better suited to long journeys than the racetrack. Its roadholding is tight and precise, and only a succession of rapid S-curves will reveal the fact that it suffers from a little too much top-weight.

Sober and without any unnecessary gimmicks, the flagship of the 1990 Triumph range was a modern, well-balanced touring machine.