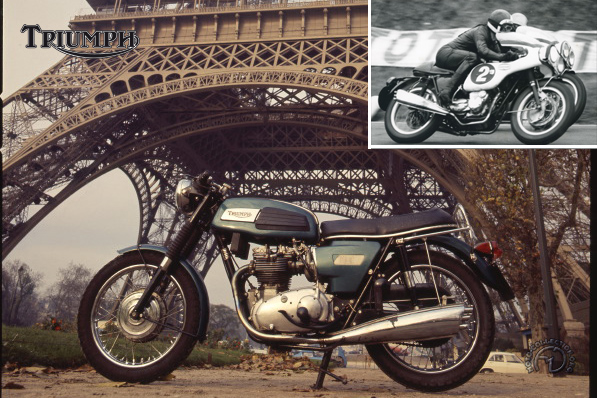 When, in 1961, the Triumph-BSA board ordered engineers Doug Hele and Bert Hopwood to increase the displacement of their Triumph twin to 750cc, the duo suggested that - to avoid excessive vibrations - it would make more sense to graft an extra cylinder onto a 500 twin.

According to Hopwood, this 750 threecylinder engine was ready for market as early as 1963. However, the BSA directors wouldn't give the go-ahead for another six years, when it was launched as a Triumph with vertical cylinders and a BSA with inclined cylinders.

The Triumph Trident engine Â– surprisingly small for a three-cylinder - had the same bore and stroke as the old Speed Twin. It was a typical Triumph design, with a heartshaped timing chest reminiscent of the marque's twins and camshafts set crosswise in the crankcase fore and aft of the cylinders. Conversely, the cycle part was old-fashioned, more like something designed in the mid- 1950s than the late 1960s, with its simple double-cradle frame and bolted-together rear end. However, that didn't stop the Trident from achieving some remarkable success on the race track - it even won the 1970 Bol d'Or - though its true debut on the international scene had to wait for the Daytona version, with its Rob Worth-designed frame.

Tbe T 150 V launched in 1973, gained a fivespeed transmission and a front disc brake but still lacked an electric starter and had lost the distinctive triple exhaust system.