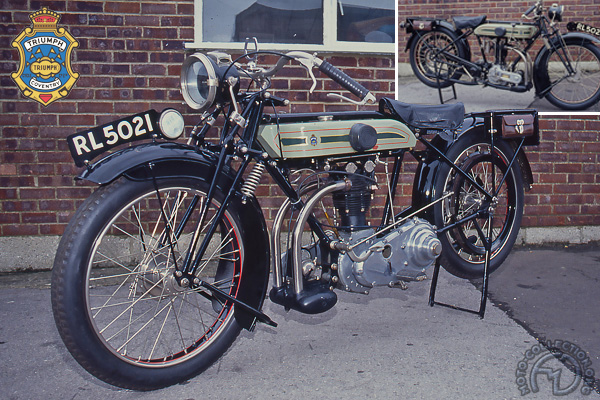 Triumph's founder Siegfried Bettmann was born in Germany. By WWI, he had become a naturalized Briton and the Mayor of Coventry, where he had been building motorcycles since 1902. Triumph supplied 30,000 Model Hs to the Allied armies during WWI. The chain-driven Model SD ("Spring Drive") 500 was introduced after the war. In 1921, Major Frank Halford, who worked for engineer Harry Ricardo, raced his Model SD at Brooklands on a patented alcohol fuel developed by Ricardo, which increased the performance.

To make the most of the new fuel , Ricardo developed a special pent-roof bronze cylinder head with four inclined valves operated by pushrods from the original side-valve camshaft.

Years Ahead of lts Time

Triumph commissioned Ricardo to develop a production version of his racing engine. The Triumph-Ricardo was ahead of its time, with a central spark plug, plus Ricardo's patent domed "slipper" aluminum piston. Its cylinder was machined from solid steel. The long-stroke (80.5x98mm) dimensions of the original "Riccy" model restricted valve size. In 1922, an iron cylinder of 85x88mm permitted 25 percent larger valves. A team of three Riccies was entered in the 1921 TT, but placed no better than 16th. In 1922, despite the loss of his middle speed, Walter Brandish finished second in the TT at 56.52 mph. Though the Riccy was catalogued until 1927, in 1924 the works went back to two-valve technology for its racers.

The Riccy in its later form, with drum front brake and dry-sump lubrication.