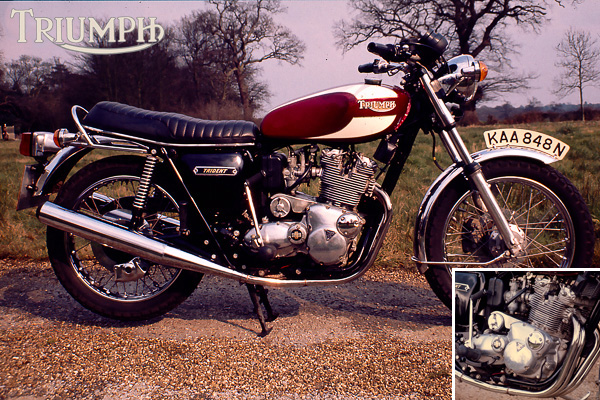 The swan song of the British motorcycle industry came in 1968, when the BSA-Triumph group launched a new three-cylinder model, built as the Triumph Trident and BSA Rocket. Excellent in conception, with an outstanding power unit, they proved to be overpriced, due to a combination of an overcomplicated specification and the cost of developing two different versions of the same design. The coup de grace came when Honda launched its more economical and robust 750cc four.

However, in 1975, the British industry made one final effort, combining Norton-Villiers and Triumph-BSA in a single distribution network, with a standardized model range hastily brought in line with current taste.

At Last an Electric Start

To comply with American standards, the British relocated the gearshift from its traditional place on the right to the left-hand side of the machine and at last fitted an electric sta1ter. Production of the BSA Rocket was halted and this ultimate T160 incarnation of the Trident had the inclined cylinders of the BSA, a rear disk brake and more flowing lines. This hasty facelift was not enough, and the Trident ended up heavier and slower. In less than a year, output had fallen to a trickle because the Trident was not competitive pricewise with its Japanese rivals.

Seemingly frustrated by the success of the Japanese fours, Triumph equipped the central cylinder of the final version of the Trident with double downpipes.