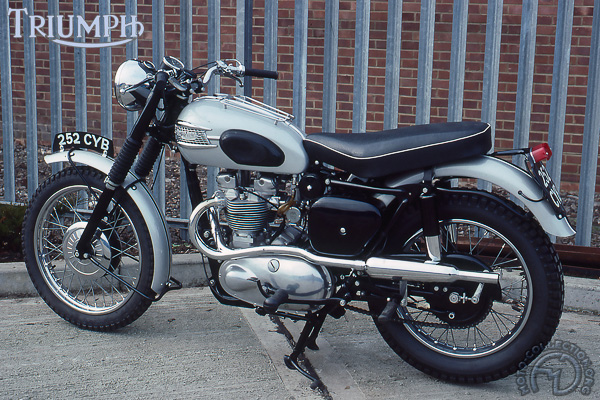 "When the Triumph Company decided in the mid-Thirties that its future was in the production of automobiles and threatened to close down the motorcycle side of the business, Ariel chief Jack Sangster stepped in and set up a deal under which two-wheeler production continued under the management of Edward Turner, designer of the Ariel Square Four.

Turner's first new model for the revived company was the 500cc Speed Twin. Triumph planned to build a 350cc version for the British Army during World War II, and the first batch of 50 was actually on the production line when Triumph's factory was destroyed by German bombing in the 1940 blitz on Coventry. When production was resumed in a new factory at Meriden in 1942, the simpler 350cc single 311W was built for the army.

But alongside the 311W, Triumph built the AAPP (Airborne Auxiliary Power Plant), a lightweight version of the 500cc vertical twin intended to recharge the batteries of Royal Air Force bombers in flight. Its head and cylinder were cast in silicon-aluminum alloy. After the war, the Silumin engine was used on sports Triumphs, including the all-round competitions machine, the TR5 Trophy.

One of the best-loved Triumphs of the postwar period, the TR5 Trophy was a successful all-round competitor