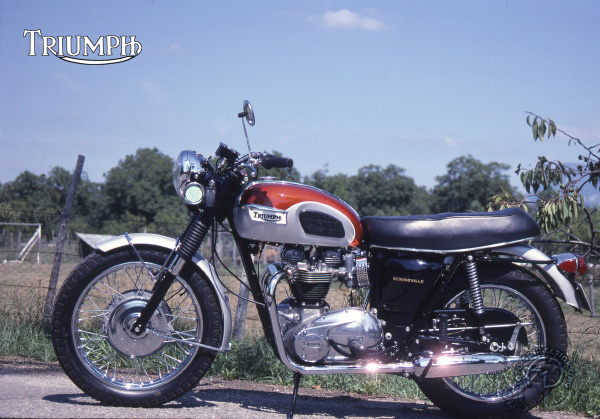 One of the most famous british bike

In 1937 Triumph announced a new bike that took the world by storm. Designed by the famed Edward Turner, the 500cc vertical-twin Triumph Speed Twin was so successful that it set a fashion that was quickly followed by all the other major British manufacturers.

In 1940, during World War II, the Triumph factory in Coventry was blitzed. Production shifted to a new factory at Meriden. The geographical center of England, where military engines with silicon-aluminum cylinder and head based on the Speed Twin were built. Postwar, a Tiger 100 vertical twin with this design won the 1946 Manx Grand Prix. By 1949, British bikes were becoming popular in the United States, and a special American-market Triumph twin, the 650cc Thunderbird, went into production. Triumph became part of the BSA group in 1951.

The Triumph twin enjoyed remarkable sporting success and set world speed records on the Bonneville Salt Flats in Utah. In 1955, Triumph power set a speed record of 193 mph and in 1962 raised the record to almost 225 mph. Though the record-breaker was a cigar-shaped projectile on two wheels, from then on Triumph named all of its twin carburetor sports bikes "Bonneville" to commemorate the event. The BSA group collapsed in 1973 and Triumph merged with Norton-Villiers.

One of the most famous Triumph models, the Bonneville vertical twin was a high-performance bike with tremendous bottom-end torque.Â”