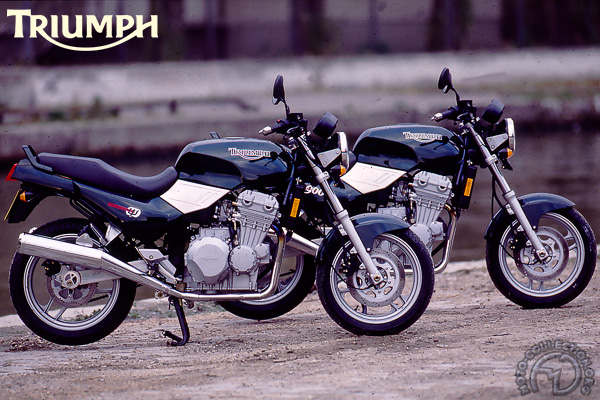 "Like the mythological Phoenix, one of the great English marques has risen from the ashes. Triumph, which built its first two wheelers in 1902, went down with the parent BSA group in 1972 and was taken over by a government-backed workers' cooperative that, unfortunately, ran out of money at the start of the Eighties.

The British are proud of their traditions, and in 1983 John Bloor bought the rights to the Triumph name and made massive investments in new production facilities. It took seven years for the venture to bear fruit - a six-model range was unveiled in 1990.

It is difficult to launch a marque with a single model (providing enough spare parts demand a colossal investment). Triumph has solved this problem with a very high level of standardization and with the modular design of its range. The range of power units includes 750cc and 900cc three-cylinder engines and 1000cc and 1200cc fours, with common crankcases. All the cylinders have the same bore; only the stroke is altered. The same principal is used for the cycle parts, tanks and trim panels. In addition to the unadorned Trident three-cylinder 750 and 900, Triumph offers the sports Daytona 750/3 and 1000/4 and the touring Trophy 900/3 and 1200/4.

Modern without being wacky, the new Triumphs combine quality with a hint of nostalgia