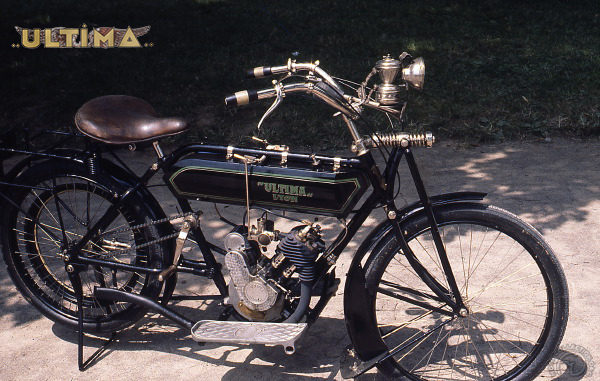 The Ultima marque could trace its origins back to 1908, when Eugene Billion began building engines for Deronziere and its subsidiaries, although he did not put his name anywhere on these power units.

Birth of a Marque

The name Ultima appeared until the 1920s, on a bike with a fixed-speed belt-drive, and an inclined cylinder with fins that ran parallel to the ground. Inspired by the Deronziere, this first Ultima became known as "Type A."

Mindful of the need to produce an inexpensive bike, so as not to compete with the war urplus military machines, Billion made everything in his workshops, including the carburetor and oil pump. The only exceptions to this rule were the tires, saddle and magneto. But low-cost production did not mean low quality. Ultima used the best metal, sound castings and careful machining. Thanks to the strong torque of its engine and a multi-plate clutch, the Type A earned a good reputation as a reliable machine and a good hill-climber. Caring little for technical fashion, Billion was reluctant to change the Type A. In 1923, the displacement was cut from 404cc (70x105mm) to 332cc (65x100mm). At the time of the 1924 Salon, new finning at right angles were added to the cylinder, along with a new gas tank and chain primary transmission. Finally, a new bore and stroke (67x99mm) brought the displacement to 348cc in 1928. The Type A was catalogued until 1929, still with belt-drive and clincher tires!