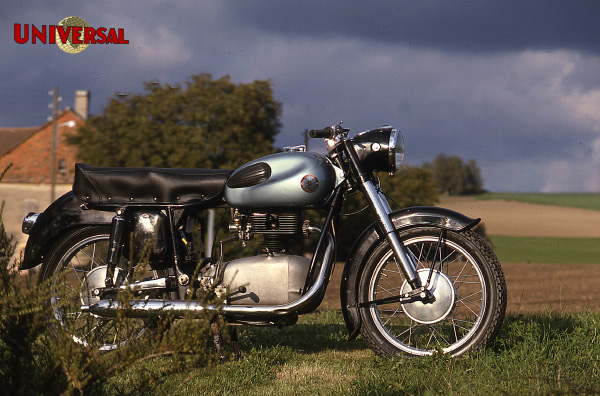 A reputation for reliability

Founded in 1929, the Universal firm never harbored delusions of grandeur or participated in costly race programs. On the other hand, the products of this little Swiss marque enjoyed a solid reputation for reliability and excellent finish, and were widely used by the police of the various Swiss cantons.

After the Second World War, Universal enjoyed great success with its new 580cc twin-cylinder four-stroke, marketed in sports and touring versions. That inspired the marque to extend its range downwards; consequently, in 1956 Universal launched this 250 single, which was available until 1960. It was the last new model from Universal, which, affected like so many others by the downturn in the market at the beginning of the Sixties, closed its doors in 1964.

The little Universal Junior could claim to be 100 percent Swiss, from its novel Oba butterfly-throttle carburetor to its locally made Firestone tires. The company's advertisements claimed: "When you buy a Universal, you are giving employment to Swiss workers!" The engine unit was huge for its displacement, but was equal to any challenge, as was the shaft drive. If its style looked somewhat Germanic, the Universal stood out by virtue of its right-hand gear selector, which followed the lead of Great Britain and France.

The appearance of the Universal junior, with its imposing engine unit, belied its modest

displacement. Moreover, it was not excessively heavy.