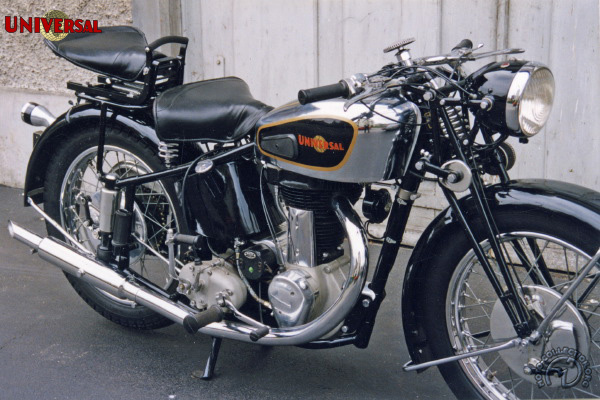 Universal, a famous Swiss motorcycle manufacturer, was founded at Willisau, near Lucerne, in 1928 by Dr. Antonio Vedovaborn in the Italian-speaking district of Ticino.

The firm moved to Oberrieden in 1936, and established its reputation by working with English engine manufacturer J.A. Prestwich. A wide range of JAP singles and V-twins appeared in Universal bikes, and Universal's participation in hill-climbs - in competition against Motosacoche and Condor Â– was successful in the sidecar class with a 1000cc JAP V-twin outfit. Among the leading Swiss riders who rode for Universal were Kirsch, Haldemann and Hans Taveri (elder brother of Luigi, who became World Champion).

When JAP cut back on racing engines to concentrate on speedway units, Universal was forced to develop its own power units, of which this ohv 500 was the final pre-WWII example. Universal manufactured a flat-twin, similar to the BMW, initially with side-valves (later overhead-valves), telescopic forks and rear suspension. This ohv 500cc single had little in common with the JAP engine. It had coil ignition rather than magneto, the valve gear was totally enclosed and the pushrods were concealed behind a large aluminum cover. The valves had hairpin springs, and, though the gearbox was still supplied from England by Burman, the dynamo was a Swiss-made Scintilla.

The 1938 Universal Sport was elegant from any angle. It had plenty of chrome and polished aluminum to delight the eye, and the big brakes and rigid frame guaranteed good road manners.