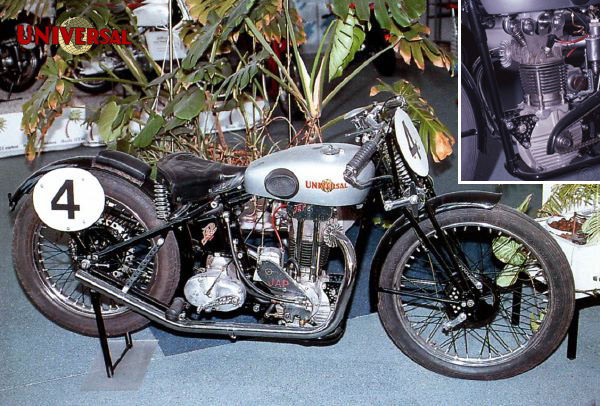 A cut above the rest

From its foundation in Lucerne in 1928, Universal took part in races and fitted JAP engines. The choice was restricted when it came to competing against Motosacoche of Geneva and its own-make MAG engines, which, along with the JAP, were equal favorites with the tuners.

The Universal-JAP didn't have any outstanding technical features. It simply revealed the care taken by the Swiss in mechanical assembly. The Universal was the first bike whose steering head used Timken taper roller bearings instead of the traditional (and cheaper) ball-bearings. At this level of quality, there is nothing degrading about the word "assembly."

The Boys from Ticino

The boss of Universal, Antonio Vedova, had his roots in the Swiss canton of Ticino, and the first works riders were also originally from this Italian-speaking region. The most notably successful was Francesco Franconi, with his 500 Motosacoche Franconi. He was without a doubt one of the greatest European champions of the 1930s, although Franconi could not overshadow another native of Ticino, Elvetio Torricelli, who joined Universal riding in the 350 class when Puch, his former employer, abandoned racing. The machine illustrated here was his favorite mount in the early 1930s. Universal fitted JAP engines to both production and racing machines until WWII. The marque still exists in the 1990s, although it has not built motorcycles since the 1960s - Universal manufactures lawn mowers.

This unique example of the 350 Universal-]AP has a genuine works engine, which differs in many details from the production model350 ]AP sold at the same period.