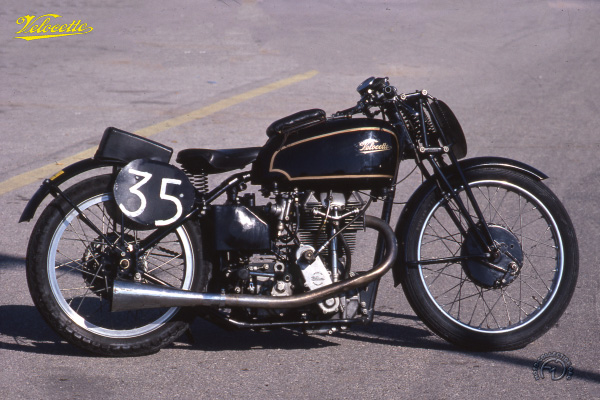 Despite the success of the works Manx Nortons, the most popular of the classic British singles among privateers was the Velocette KTI, which won the coveted Senior TT title in 1926-28-29-38-39 and later in 1947-48-49.

Designed in 1924, the KTT possessed an overhead camshaft driven by shaft and bevel gearing. Its mechanism was, nevertheless, relatively quiet. It was endowed with a light alloy cylinder head in the late 1930s. Generously finned , its valves and rockers were totally enclosed, a feature notably still lacking on contemporary Nortons.

After two years' development, the KTT had its ftrst major success at the 1926 Isle of Man Tourist Trophy meeting in which it won the 350cc Junior race, beating the hitherto unassailable AJS Big Port. At the end of 1928, the KTT was the first machine to adopt a footoperated gear selector and abdicate its status as a works machine in favor of a new role as an over-the-counter racer for privateers. It was also available in roadgoing form as the KSS (Sport Roadster). The seventh incarnation of the KTI, unveiled in 1937, had the new aluminum cylinder head with enclosed rockers, though it retained the rigid frame of its predecessors. It was not until the following year that Velocette made the great leap forward and adopted swinging fork rear suspension - fitted to the works racer of Stanley Woods since 1936 - on the Mk 8 production version of the KTT.

This KTT- ridden in the illustration by Cecil Sandford, 1952 125cc and 1957 250cc world champion finished ninth in the 1938 junior TT ridden by the Frenchman Roger Loyer.