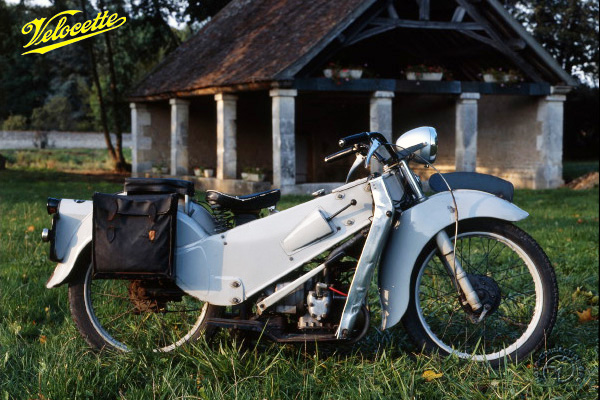 Launched in 1948, the LE Velocette was aimed at a market that was not particularly enthusiastic about motorcycling but wanted a mode of transport that was practical, clean and economical. The work of designer Charles Udall, the LE (the initials stood for

"Little Engine") was originally criticized for the lack of power of its 149cc flat-twin power unit, so that was upgraded to 192cc with a consequent improvement in torque.

Quieter Than a Luxury Car

Thanks to its liquid cooling, side valves, oversized intake and exhaust silencers and shaft drive, the LE Velo was remarkably silent. It was even quieter than luxury cars. Above 30 mph, the sound of the wind drowned out the whisper of the exhaust. Though the LE failed to attract orders from the public in The expected numbers, its ghostly silence was just what the British police had been looking for in an urban patrol bike.

The LE had both a glovebox (used by the police to house radio batteries) and rear luggage carriers. An ingenious hand lever performed the dual duty of starting the engine and raising the central stand. In 1958, the LE Mk III gained a fourth speed, a footchange transmission and a kick-starter. A two-tone paint scheme became optional instead of the unrelieved gray. Though Velocette tried to replace the LE in 1963 with the Vogue, the factory finally closed in 1971.

The LE Velocette was a refined, well-mannered bike much favored by the British police.