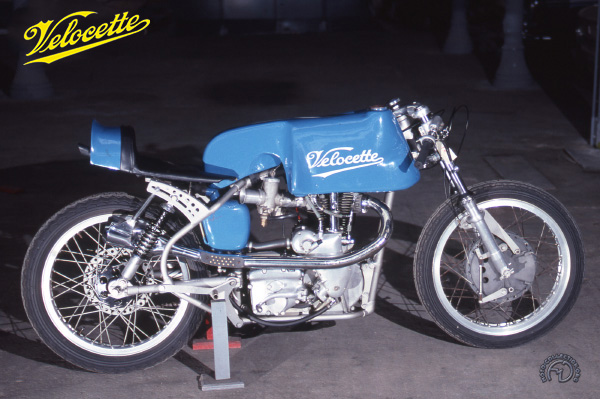 The Velocette Thruxton took its name from an airfield racetrack where the Southampton Club organized an endurance race for production machines in the 1950s. This kind of Clubman racing ideally suited the bigsingle Velocette and the success of the 500cc Venom in Thruxton events led to the launch in 1965 of the Thruxton, a supersports

version of the Venom with a full racing kit.

The Thruxton was the ultimate development of the M-Series line of high-camshaft, short pushrod sports Velocettes that had originated as early as 1934. The peak of its distinguished competition career was a first- and second place victory in the 500cc class of the first ever ACU Isle of Man Production Machine TT in 1967 at a winning average of 89.89 mph.

Robert Leconte, Velocette importer for France, developed the Thruxton even further. He retained its downdraft cylinder head, but lightened the crank and the connecting rod, and even lightened the pinions driving the high-lift cams, which now ran on needle-roller bearings. Double valve springs were fitted, the intake port was increased in diameter from 1.2 to 1.4 inches, and the clutch casing was removed. The "Leconte Special" developed over 50 hp compared with the standard Thruxton's 41hp, and had a top speed of 129 mph against 114 mph. Other changes included the fitting of an older, but lighter, MSS rear hub, plus the adoption of an Italian Grimeca drum front brake and Ceriani telescopic forks.

This typical1960s Velocette racer gained Claude Vigreux the French championship title in 1965 and was raced by Bontemps the .following year.