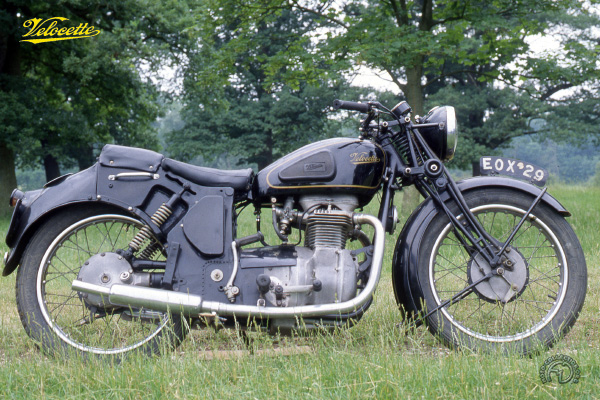 Two crankshafts are better than one

In 1937, the works 350 KTT Velocettes were virtually invincible in racing, but their 500s were less brilliant, and the arrival of the blown multi-cylinders seemed to have written off these naturally-aspirated singles. So Velocette decided to break with tradition and began a bold project for a supercharged twin with two geared-together counter-rotating crankshafts - the legendary Roarer!

Velocette policy dictated that the marque's racers should resemble its production machines. In parallel with the Centric-blown Roarer developed by Harold Willis, the Brillant Australian engineer Phil Irving (formerly of Vincent-HRD) worked on the Model 0, designed to share the image of the Roarer, though its aims were totally different. The Model 0 was intended as an easy-to-use machine, easy to start, with good bottom-end

torque, exceptional flexibility and a power output of 30 hp.

The two counter-rotating crankshafts practically eliminated vibrations and torque reaction. Another novel idea was the use of Metalastic flexible engine mounts. Moreover, the Type 0 offered adjustable swing arm rear suspension and shaft drive. In 1939, who could have asked for anything more? If it had reached the production stage, the Model 0 would have had virtually-square engine dimensions of 68x68.25mm, but the prototype used KTI pistons and rods. Sadly, the outbreak of war brought an end to the bold Model 0 project.

Lack of finance forced the British industry to stay conventional, although the Velocette Model 0, one of the most sophisticated designs of its day, revealed its capacity for innovation.