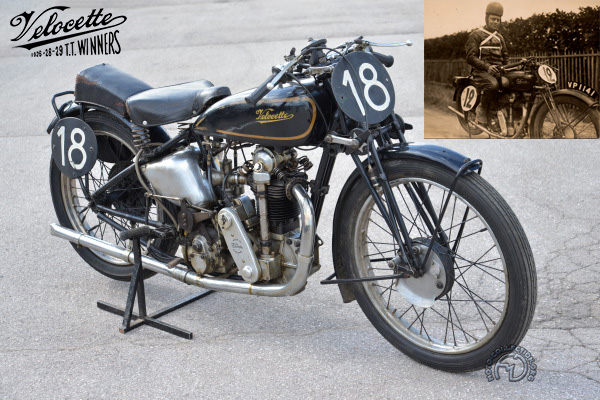 In 1926, riding a works Velocette, Alec Bennett won a resounding victory in the Tourist Trophy, beating the next man home by several minutes. He was defeated by an HRD in the 1927 Junior TT, but the marque won the two following years, 1928 and 1929.

Flushed with success, Velocette tried a number of innovations in 1928, of which the most notable was a foot-operated gear selector in place of the traditional hand lever on the side of the fuel tank. It was copied by every manufacturer worldwide. Another revolutionary feature was the swing ann rear suspension. Velocette used a complex system with a friction-damped pivoting rear-frame triangle acting on twin springs beneath the saddle through the medium of bellcranks. Tricky roadholding and a substantially reduced ground clearance insured that this suspension - too far ahead of its time - was never raced.

Swing arm rear suspension did not reappear on a racing "Velo" until the Mk VIII KTT of 1939. In 1929, Velocette announced the KTT Mk I, a replica of the victorious TT machine. It was the first true "client-competition" and remained the favorite mount of clubman racers right up to the immediate postwar period. In the 1930 Manx TT, restricted to amateur riders, KTT Velos took the frrst eight places! This overhead-cam single had the trend-setting foot gearshift and its roadholding was remarkable for the period. On a gasoline/benzol mix, it reached 100 mph.