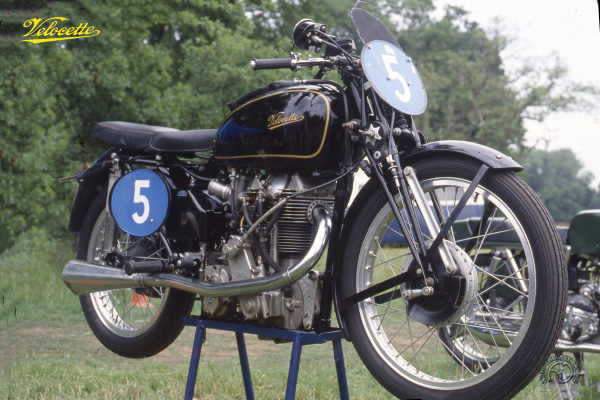 Stanley Woods was the victorious rider in 1938-39- his ninth and tenth TT wins in an illustrious career. His 1939 Mk VIII was a development of the previous Mk VII KTT. Launched in May 1939, the Mk VIII was a step forward for Velocette, for it was the marque's first production bike with rear suspension. Moreover, Velocette had bypassed the plunger rear suspension option adopted by most other manufacturers who had abandoned rigid rear ends and went straight to the advanced swing arm suspension.

The Mk VIII's other main differences from its predecessor were new conical-hub brake drums in aluminum and magnesium end plates. The overhead-camshaft engine had the same bore and stroke, but it now had a liberally-finned sleeved-aluminum cylinder. The head was of aluminum also, with an 8.75:1 compression ratio; hairpin valve springs, first seen in 1932, were now fully enclosed. The bottom-end was unchanged - here was no need for it! Production resumed after WWII and again it carried off a TT double, in 1947-48. The career of the legendary KTT ended in the 1950s when Velocette concentrated on "everyman" bikes.

The Velocette KTT was the best "client-competition" bike of its day and had six junior TTs to its credit.