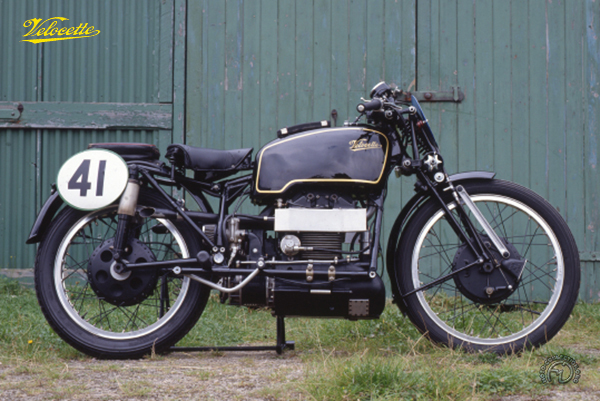 The Veloctte Roarer was a casualty of WWII. Conceived in late 1938 by designer Harold Willis, it was constructed during the spring of 1939. It only ran in practice for the 1939 TT, and the postwar ban on superchargers brought an end to its career. This unique British attempt to strike back at BMW might have given Velocette the same dominance at the highest level that it already enjoyed with its KTT clubman racer.

Designed in parallel with a twin-cylinder tourer, the Roarer had nothing in common with the road-going machine save the original layout of its engine, which had two transverse crankshafts geared together for perfect balance. Each cylinder had its own independent single overhead-camshaft driven from a common kingshaft. Cylinders and cylinder heads were of aluminum and the crankcase was entirely made of magnesium.

The supercharger, built into the rear part of the engine unit, fed the cylinders at the front by two backward-sloping intake pipes whose length ensured tremendous engine flexibility. The transmission shaft - chosen to prevent oil from getting onto the rear tire Â– ran inside the swing arm of the rear suspension in the most modern manner. The planned telescopic forks had been replaced, at the request of Stanley Woods, by a classic girder fork. Tried over the TT course during the 1939 practice session, the Roarer showed its immense potential. It steered like a dream and was turbine smooth.

The legendary Roarer is once again in running order, thanks to an extensive restoration by marque specialist Ivan Rhodes.